Infinity
So nice to meet you here again, thank you! A new full moon means a new full moon blog by Rosalie and I. This morning at 6:35 h the moon was in her fullest form, in the sign of pisces. For now, we will leave the undertow we explored last mooncycle and we will dive a little deeper.
fullmoon, fullmoon blog, dream, dreams, infinity, finite, being, illustration, drawing, people drawing, gouache
23733
post-template-default,single,single-post,postid-23733,single-format-standard,stockholm-core-2.3,select-child-theme-ver-1.1,select-theme-ver-8.10,ajax_fade,page_not_loaded,,qode_menu_center,wpb-js-composer js-comp-ver-6.7.0,vc_responsive

Everything
Is temporary
In order to
discover our true nature:
INFINITY

So nice to meet you here again, thank you! A new full moon means a new full moon blog by Rosalie and I. This morning at 6:35 h the moon was in her fullest form, in the sign of pisces. For now, we will leave the undertow we explored last mooncycle and we will dive a little deeper.

Autumn is coming. On September 21st we will celebrate the Autumn equinox, also called Mabon. In this period of time nature is getting ready to turn inward. Her power of growth decreases and she will let go what is no longer needed. In nature this process is repeated over and over again, just like the moon is waning and waxing every cycle. Circle after circle.

Like raindrops touching the smooth surface of water, making continuos halos next to, in and through each other. From big to small and all sizes in between. We, who are the witnesses of all of this, can see the changing and falling of the leaves from the trees and we experience it like a temporary and finite phenomenon. We know all is ending. That everything around us will end someday, sooner or later. It’s how our own impermanence is reflected back to us. The finiteness of life itself. It confronts us with loss and saying our farewells. But, before we will go deeper into that subject in a next full moon blog, we will take you on a search for finiteness and infinity first.

In 2017 Rosalie visited a lecture by Rupert Spira together with her twenty year old nephew. Spira is a well-known English ceramic craftsman and also an international spiritual teacher of the Advaita Vedanta and Non-Duality. During the talk he spoke a lot about ‘awareness’ and about ‘awareness being aware of itself’. In other words consciousness being conscious of itself. Also he talked about finiteness and infinity and how something that is infinite, can sometimes seem to be finite for us. These concepts were quite new to Rosalie at the time and it was a bit of a challenge for her to have a good perception on what this all meant. She wasn’t the only one in the room though who felt like that and so Spira shared and inspiring and insightful analogue on Mary and Jane. We would like to share this story with you aswell and that is why we will take you on a trip to Mary and Jane’s world.

Take your time to read it a couple of times and let it sink in. If you prefer reading the story in Dutch, please hop over to Rosalie’s blog. 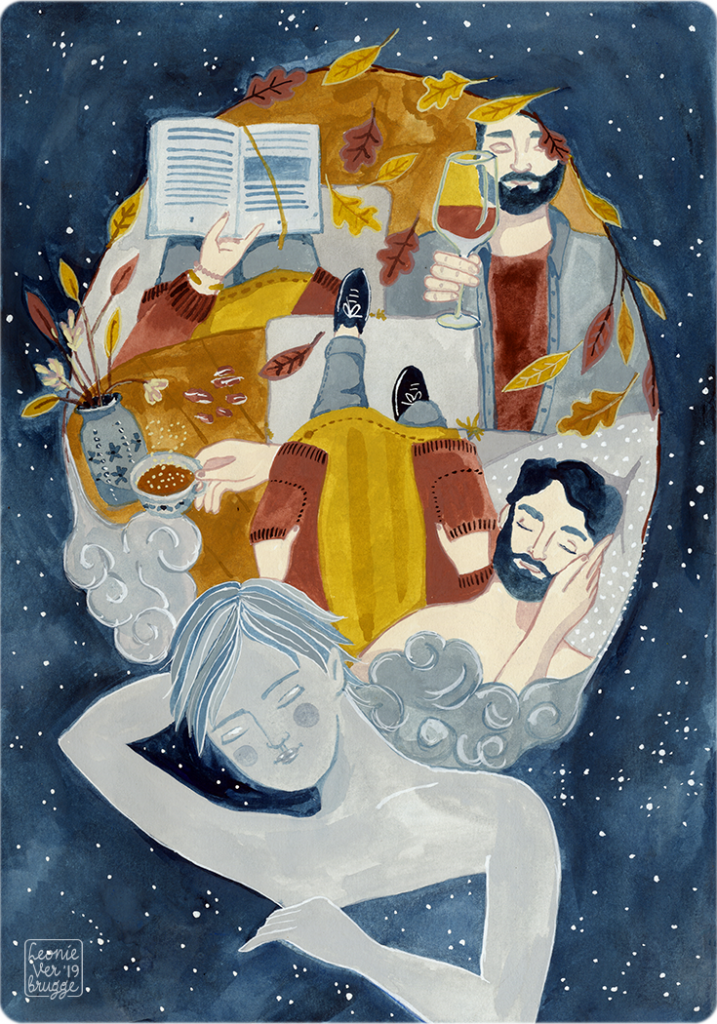 Click on the image and download it from there. You can use it as wallpaper on your phone or print it and hang it above your desk.

In an attempt to answer this question I (Rupert Spira, LV) would like to give you an analogy. Imagine a woman named Mary falling asleep here in Amsterdam. Mary’s mind is a single indivisible whole, like each of our minds, and Mary dreams that she is Jane walking the streets of New York. So, Mary’s mind has fallen asleep to its own infinite, indivisible nature and imagines instead that it has assumed the limited form of Jane’s mind. Jane is walking the streets of New York, seeing people, cars, buildings, which from Jane’s point of view all seem to be outside her mind.

When Jane closes her eyes the streets of New York disappear, and therefore she legitimately concludes that whatever it is that is seeing the streets of New York lives just behind her eyes. This and similar experiences convince Jane that the knowing with which she knows her experience lives just behind her eyes, or in her chest, in her body. All her thoughts, feelings and subsequent other activities and relationships are consistent with this belief.

One day Jane goes to a café, and sitting at the table next to her is a handsome man called David. David and Jane notice each other, they start having a conversation, and Jane feels a mysterious attraction to him.

Of course, David and Jane, the café and the streets of New York are all appearances in Mary’s infinite mind. Mary’s mind itself has not been divided into a multiplicity and diversity of objects and selves. It is still the same seamless, indivisible whole that it always is, and yet it has taken on the appearances of Jane and David, and the world in which they seem, from their point of view, to be located. Mary could have dreamt that she was David, instead of Jane, on the streets of New York, in which case she would have seemed to see her experience through David’s eyes instead of Jane’s.

When Jane feels this mysterious attraction towards David and they begin dating, she has a strange feeling that if she were to get closer to David, the pain that she feels in her heart, that she has been trying to escape from all her life, would somehow be alleviated. She feels that somehow to merge with David would give her relief from the pain from which she has been running all her life.

Eventually she and David do get together, and when they merge in friendship and sexual intimacy, she does indeed feel temporary relief from the pain of her longing. What is really happening? Why does Jane feel this longing? From where does the intuition come that it is possible to be relieved of her suffering? And what happens to her suffering when she and David merge?

In this moment of merging there is a temporary loss of all the limitations with which Jane defines herself. There is a temporary collapse of Jane’s finite mind, and in that moment she tastes the essence of her mind, which is Mary’s peaceful mind asleep in Amsterdam.

Now, of course, when Jane and David part, this temporary suspension of suffering comes to an end and she feels everything that defines her again. The suffering bubbles up again and she remembers, ‘Ah, the last time I united with David the suffering went away. Therefore, uniting with a person, an object, a substance or an activity must be the way to get rid of my suffering.’

So Jane goes again and again to the object, the substance, the activity or the relationship, in order to find relief from her suffering. Indeed, each time she unites with the object, activity, substance or relationship she does find temporary relief, and this builds up in her the conviction that the way to be free of her suffering is to continually acquire objects, activities, substances and relationships. She ends up being addicted, like most people are, to some kind of an object.

The subtlest object, of course, is thought, and this is the main addiction. It’s free and not bad for our health, so it’s an addiction that doesn’t normally get labelled as such.

Nevertheless, it is an object towards which we give our attention, mainly in order to distract ourselves from the wound of separation that all apparently separate selves carry around within themselves.

This wound of separation, this longing for freedom, peace, happiness and love is, in fact, an echo in Jane of the nature of Mary’s mind. Mary’s mind is at peace, free, asleep in Amsterdam.

In the same way, to bring manifestation into apparent existence Consciousness needs to fall asleep to its own infinite nature, because it is not possible for something that is infinite to know something that is finite. There is no room in the infinite for the finite.

Manifestation means form, and form means limit, so in order to experience something limited, such as a universe, Consciousness must overlook the knowing of its own unlimited Being. It must fall asleep to itself and freely assume the form of the finite mind.

Here is a link to a meditation of Rupert Spira about the Now and Awareness: https://youtu.be/OZ8tQYYNIg0